Leaping into the air

Lets admit that it was nice to have a jump shot photos. Specially that digital cameras getting affordable which we can enjoy taking bunch of photos. Most of the time it took many clicks before we achieved the perfect leaps into the air. The best part of it after seeing the result which are the facial expressions and different style of leaping. No more simple jumping up, that is so passe. Let's be creative. Here's my collections and vivid memories of jumpshots that can be cherished for a lifetime... Do you also have a jump shot photos? 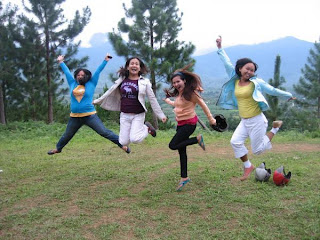 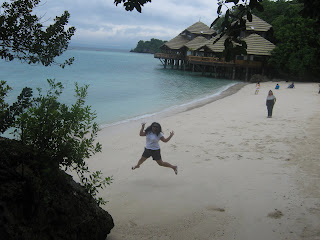 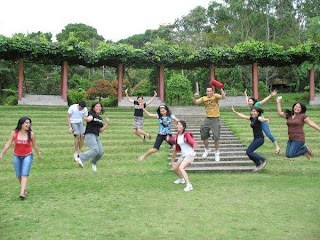 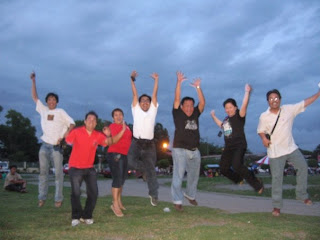 I didn't know you collect this kind of shots Rain!

Your photo of the GenSanBloggers with me, is the best, of course!

Thanks for featuring us here.

your good with pics na talaga dear c:
by the way ok naman na si Josh nagkaubo sya weekend but nothing major na thank you kay Lord c:
thanx for the visits and the recogniton c:

wow ang daming photos, nice shots.. its been a while since my lAST VISIT, KUmustA na?

Hello, I really like your photos. May I copy some of them for www.geotayo.com? I will provide a link to your site.

@ chubskulit - Thanks for visiting again =) I feel so good today. How about you?

@ Jun - Sureness! Just let me know para naman ma visit ko and will link you back too =) Thanks for your visit =)

wow! nakkatuwa naman ang mga girls. . they have so much fun. love it

I have copied the pearl farm photo
to www.geotayo.com/samal.php with a link provided to your blog site.

Thanks very much. BtW, you can also join geotayo and promote anything. It is a new site so kakaunti pa ang members.

I really like when people are expressing their opinion and thought. So I like the way you are writing

Newer Post Older Post Home
Subscribe to: Post Comments (Atom)
This policy is valid from 19 January 2011
This blog is a personal blog written and edited by me. This blog accepts forms of cash advertising, sponsorship, paid insertions or other forms of compensation.
This blog abides by word of mouth marketing standards. We believe in honesty of relationship, opinion and identity. The compensation received may influence the advertising content, topics or posts made in this blog. That content, advertising space or post will be clearly identified as paid or sponsored content.
The owner(s) of this blog is compensated to provide opinion on products, services, websites and various other topics. Even though the owner(s) of this blog receives compensation for our posts or advertisements, we always give our honest opinions, findings, beliefs, or experiences on those topics or products. The views and opinions expressed on this blog are purely the bloggers' own. Any product claim, statistic, quote or other representation about a product or service should be verified with the manufacturer, provider or party in question.
This blog does not contain any content which might present a conflict of interest.
To get your own policy, go to http://www.disclosurepolicy.org