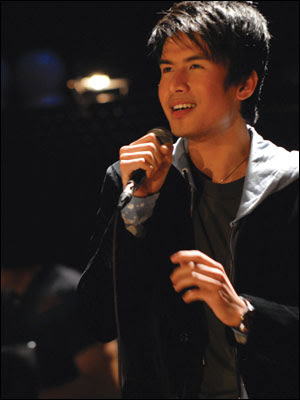 I was amazed when GenSan News Online Mag” announced that Christian Bautista is coming to town on April 23, 2010, Friday at Lagao Gym around 7 pm for “Constant Change” GenSan Concert. I fell inloved with his songs entitled “ Tell Me Your Name” originally performed by the legendary Jose Mari Chan. 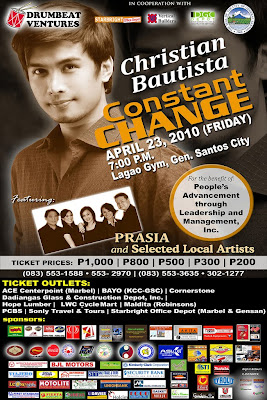 PRASIA and selected local artists will be with him to perform. This concert will benefit People's Advancement through Leadership and Management, Inc.
Posted by Cidz at 11:57 PM

This policy is valid from 19 January 2011
This blog is a personal blog written and edited by me. This blog accepts forms of cash advertising, sponsorship, paid insertions or other forms of compensation.
This blog abides by word of mouth marketing standards. We believe in honesty of relationship, opinion and identity. The compensation received may influence the advertising content, topics or posts made in this blog. That content, advertising space or post will be clearly identified as paid or sponsored content.
The owner(s) of this blog is compensated to provide opinion on products, services, websites and various other topics. Even though the owner(s) of this blog receives compensation for our posts or advertisements, we always give our honest opinions, findings, beliefs, or experiences on those topics or products. The views and opinions expressed on this blog are purely the bloggers' own. Any product claim, statistic, quote or other representation about a product or service should be verified with the manufacturer, provider or party in question.
This blog does not contain any content which might present a conflict of interest.
To get your own policy, go to http://www.disclosurepolicy.org